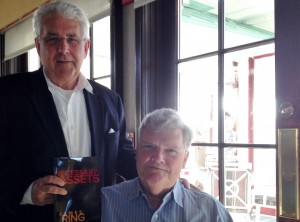 The author presents a personalized copy of Necessary Assets to primary reader Ken O’Brien at a book celebration held at the Marco Island Yacht Club, Marco Island, Florida on March 26,2014

In front of a neighborhood audience, author and retired FBI agent James Ring described the “inspired” fiction of his novel, Necessary Assets, at a Saturday afternoon book reading hosted by the Friends group at the North End Branch Library.

A longtime North End resident, Ring incorporated many neighborhood features into the book despite the broader subject matter involving global terrorism. From the “Strada Cafe” to “Franklin Wharf,” locals will recognize and appreciate the disguised hometown color (and maybe even some personalities).

Necessary Assets describes an Al Qaeda terror plot that brings forth an unusual alliance between a modernized Sicilian Mafia and retired FBI agent character, Mark Patrick, who lives in the North End. The reader travels with the action to Naples, Palermo, Tunis, Sana’a in Yemen and eventually to Manhattan and Boston.

Many at the book reading wanted to know how much was “real” versus “fiction” especially given Ring’s FBI experience in dealing with the Mafia and knowledge of tactics used by terrorism groups. While caveating the storyline as fictional and humbly describing his past professional experience, it is exactly that deep knowledge that brings an absorbing reality to the subject matter of the book.

The author read passages from the book at the event, including this one about living in the North End that received a chuckle from the local attendees at the library.

On warm summer evenings years ago, Patrick used to sit on the stoop with some of the older neighborhood women and the talk would always turn to food and cooking. He eventually figured out that some of the older women in the neighborhood would pass on to him a recipe that did not include one or two key ingredients. They openly admitted they never gave all the recipe ingredients to their own daughters-in-law. That way they could be assured their son would show up for Sunday dinner to eat “the way mama cooks it.” Despite working for the FBI and generational gaps, these women were his friends and he theirs.

Visit www.jamesring.com for more information on Necessary Assets, including a blog and upcoming appearances by the author. On the blog, Ring talks about the US economy and how important it is to our national security.  He also recently discussed a wake-up call right outside our door from Yemenese LNG tankers in Boston Harbor. He also gave every indication that a sequel may be in the works!

Necessary Assets is available to take out with your library card at the North End Branch Library, 25 Parmenter Street. It is also available on Amazon.com. To purchase a signed and dedicated copy, contact Omni Publications with your detailed request at [email protected].

Below are some additional photos from the book discussion at the North End Library: 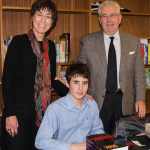 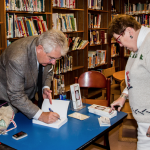 James Ring at the event were his wife, Merita Hopkins, and grandson.

Hailing to the author’s local and national experience, the book gets rave reviews from Boston’s Mayor Menino as well as former FBI officials.

“Jim Ring’s Necessary Assets is a novel that highlights – as in real life – the fight against terrorism and crime will always need the help of local citizens. It’s a book worth reading.” Thomas M. Menino, Mayor of the City of Boston

Boston—Omni Publishing Co. is proud to announce the publication of the novel, Necessary Assets, by James Ring of Boston and South Dartmouth, Massachusetts.
This riveting work of fiction begins with an unusual alliance between a modernized Sicilian Mafia and retired FBI agent Mark Patrick. The Mafia, in an effort to prevent an al-Qaeda terrorist attack on US soil, offers to anonymously furnish information to the FBI, but only through Patrick.
Desperate to convince their fundamentalist donors to return to the fold, al-Qaeda has authorized “The Engineer” to operate off the AQ grid leading two cells of radicalized US citizens to attack the nation’s economic hub, Manhattan, and its freedom hub, Boston. They are willing to unsheathe an evil not yet dared, transforming both cities into dead zones where no one can commute to work.
Ring’s extensive FBI background allows him to tell a very realistic tale, where the agents are not super heroes, the Mafia is not all powerful, and the international terrorists are presented as they are – a very dangerous and constant threat to America. The reader travels with the action to Naples, Palermo, Tunis, Sana’a in Yemen and eventually to Manhattan and Boston. However, this novel remains throughout a story about neighborhoods, where residents watch out for each other.

“Jim Ring’s Necessary Assets is a novel that highlights – as in real life – the fight against terrorism and crime will always need the help of local citizens. It’s a book worth reading.”
Thomas M. Menino, Mayor of the City of Boston

See what former NSA and CIA Director Gen. Michael Hayden has to say about the levels of damage done to US security and the heads up Edward Snowden has given our adversaries in the following CNN article:

Is the political world going to address the Yemen LNG? See the following article from www.boston.com 8/13/2013:

BOSTON (AP) — U.S. Sen. Edward Markey is asking President Barack Obama to order the U.S. Coast Guard to review security procedures for shipments of natural gas from Yemen to terminals near Boston.
The Massachusetts Democrat said increased terrorism activity in the Middle East region warrant stepped-up security of deliveries of natural gas to the facilities in Everett.
Markey, a member of the Senate Foreign Relations Committee, has long pointed to the natural gas facilities as a potential terrorist target.
In a letter to Obama, Markey says security threats in Yemen raise what he calls real questions about whether it’s safe and reliable for tankers to continue delivering shipments to the Everett LNG terminal.
The U.S. embassies in Yemen and other Middle East countries were evacuated under the threat of a possible terrorist attack.
© Copyright 2013 Globe Newspaper Company.